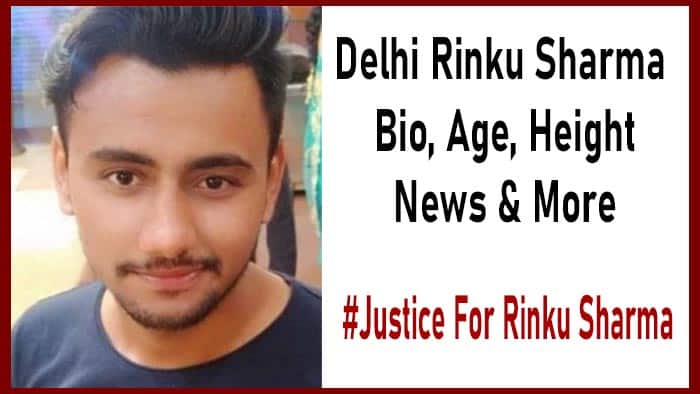 Wednesday night after getting into a heated conversation at a birthday party, Rinku Sharma gets assaulted and then stabbed to death by a group of people in front of his house in Delhi Manglopuri. Scroll down to get the complete details of Delhi Rinku Sharma. We walk you through all about Rinku Sharma Bio, Wiki Age, Career, Height, Weight, Family & More.

Victim Delhi Rinku Sharma was born in 1996 and as of 2021, Rinku Sharma is 25 years old, he was living with his parents and two younger brothers in K-Block of Mangolpuri

On Wednesday night Rinku Sharma get into a quarrel at a birthday party with four men, later the accused went to Rinku Sharma’s house and brutally stabbed him to death in front of his house.

The victim’s brother said, the assailants who were armed with knives and sticks, knocked on their door and get in, and before we could understand what’s happening they surrounded us and start asking about my brother.”

After the accuser found Rinku Sharma they dragged him outside the house and punched and kicked him many times then later stabbed him in the back with a large knife and fled.

The family members then take him to the Sanjay Gandhi Hospital. Brother Ankit also said the attackers intercept them while they were rushing to the hospital and they reached the hospital too.

After reaching Sanjay Gandhi hospital doctors took out the knife from his back and referred him to another hospital for further treatment on 11 February, but his situation was getting worse and Rinku Sharma died before he could be shifted.

A resident of Delhi Mangolpuri Rinku Sharma is a 25 years old man living with his mother Radha Devi, father Ajay Sharma, and two younger brothers Ankit and Manu Sharma in K-Block of Mangolpuri.

Apart from volunteering in the Hindu organization Rinku Sharma worked as a lab technician at a hospital in Paschim Vihar Delhi, and he was the only earning member in his family, his father left the job a year ago because of a serious illness.

According to OpIndia he was an active member of the Bajrang Dal and raising funds for Ayodhya Ram Temple which became the reason for his brutal death (Source: OpIndia)

While police said the argument was over a food business rivalry and Viswa Hindu Parishad saying he was murdered because of collecting funds for Ram Mandir.

Police said both parties opened their restaurant nearby in Rohini last year and because of incurring losses they closed down their business and both parties started blaming each other for the losses and often this conversation turn into a tussle but this time because the assailants were big in numbers they killed Rinku Sharma cold-blooded.

Police said “All four men have been arrested on Thursday and it was found that both parties lived in the same neighborhood and none of them has any previous criminal records” by Additional deputy commissioner of police Sudhanshu Dharma. (Source: Zeenews.india.com.)

According to Rinku Sharma Brother

According to Rinku’s brother Ankit, Rinku went to a birthday party on February 10 in the neighborhood of a mutual friend where the other four were already there and they had a heated argument.

Brother said assailants dont have a good relationship with their family because Rinku is Ram Devotee and volunteers in Bjp programs and after last year he organizes an awareness rally in the area to collect funds for Ram Temple the situation get worse between them, and he became the prime target of attackers.

Brother also said they dont have any eatery business which media is showing, he said: “Rinku was as a lab technician at a hospital in Paschim Vihar Delhi.” (Source: IndianExpress)

According To Rinku Sharma Father

According To Rinku Sharma Father, After Rinku came home on Wednesday evening all the attackers follow him and get enter in the house and started searching for Rinku Sharma, Attackers also open the LPG cylinder intending to burn the house. (Source: Aajtak)

Rinku’s father said 25 to 30 attackers entered the house and started searching for Rinku they also attacked his younger brother and pulled them away.

The attackers were armed with sticks and knives, they dragged Rinku outside the house beat him, stabbed him, and fled.