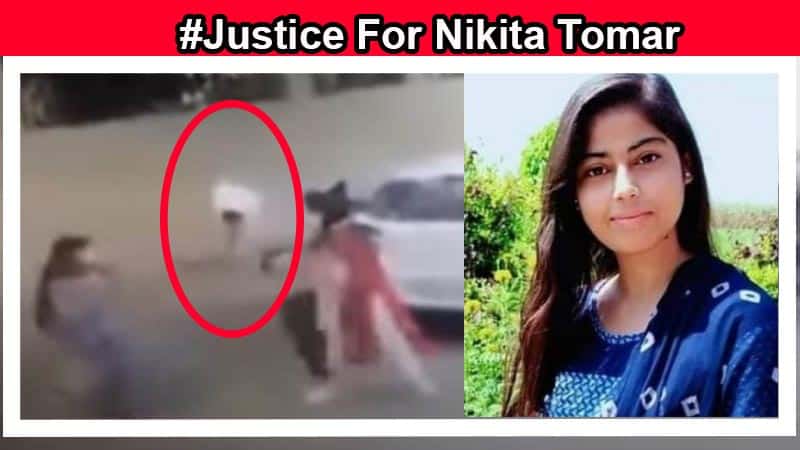 Nikita Tomar was currently 22 years old, studying in Bcom final year, and lives in Faridabad sector 23 with her family. Recently, CCTV footage has gone viral on social media, where a guy named Touseef shot her in front of her brother’s mother and friend.

All happened on 26 October when she finished her exam and came out of college where this peace-loving community guy Touseef was the MLA cousin, and his friend Rehan was waiting for her to kidnap her.

This Ambush he was not doing for the first time. It was happening for the last two years; you can read that full story from the start in incoming paragraphs.

Nikita Tomar was very good in her studies. She got 95% marks in her 12th board exams, and currently, she was pursuing the Bcom from Faridabad here, where also she does the top every semester in her batch.

Nikita’s dream was to become an Air Force officer. She studied very hard to clear her NDA exam to join the Army, but all her dreams are gone now with her.

Nikita lived with her family in Faridabad Sector 23 with her father Mulchand Tomar, Mother, and brother Naveen Tomar. Her brother and mother were also there when Touseef Shot her, but they were empty-handed, and Touseef had the gun, they were in no position to save her, and Touseef also ran away so easily their presence.

Tauseef was trying to kidnap her for the last two years. He wants to marry Nikita to convert her to Islam, but Nikita refused to marry her or even talk to him, so Tauseef wants to teach her a lesson.

So on 26 October, Tauseef was waiting outside her college in his I20 car, and when Nikita came out after complete her exam, he tries to kidnap her. Still, Nikita Retaliat and this time, her brother Naveen and mother also arrived there, and after Tauseef saw her brother and mother, he shot her and ran away.

She was fighting with Tauseef for the last two years. She fought with bravery all this time, but this time this was the end.

How all this Start?

This story star from Faridabad Sector 23, where Nikita and her family lives and Muslim boy Touseef who lives in Mewat; Touseef comes from a very highly political part. His many family members are in politics, his grandfather was a former legislator, and his cousin brother was also a legislator from Haryana.

Nikita Tomar and Touseef had known each other since they were children, they went to the same school, and they were in the same class, But all this time she didn’t know what are the true intentions of Touseef all this in his mind and in but in 2018 Touseef showed her true colors and try to kidnap her so he can marry to her and convert her to the Islam.

Nikita said this situation to her family, and This matter goes to Panchayat. Her father also tries to take legal action against him and his family, but the police didn’t take any against because he came from a so-called Peace community and was the MLA’s cousin, So police solved this matter by only talk. If the police take any action against him, then this all will not happen today.