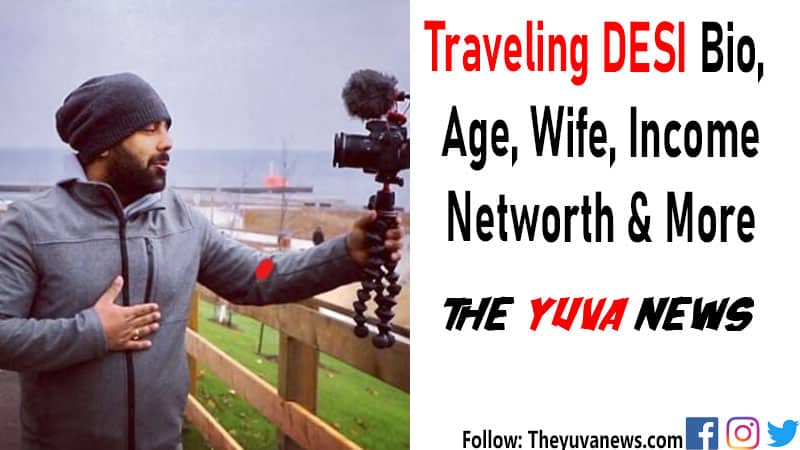 Travelling Desi, real name is Mohit Manocha he born and brought up in Faridabad, India, on 16 August 1986. Currently, he is 34 years old, He started his career as an IT entrepreneur, and now, he is one of the most subscribed travel vloggers in India.

Mohit Manocha’s father died a few years back by serious heart illness; his mother is a retired school teacher; Mohit also has one brother working and settled in Canda.

You may have also seen a boy in his videos; he is the nephew of traveling desi Nikhil; he came to Canada in 2019 for study purposes.

Mohit started his career as an IT entrepreneur. He didn’t take admission to college regularly, so his father sent him to his uncle so he can learn their software business; his uncle gave him a job in the sales department. He was performing well there; he gave sales to the company 50% more than any other employee, so his uncle made him the partner in his business.

But after some time, due to his problems, he can’t focus on work, and the company started going in losses, so after a discussion, his uncle shut the business.

By this incident and his problems, he went to depression. After the proper medication and family support, he came out from the depression, and for further career, He chose to start making travel videos on YouTube.

This is the most asked question about him in his youtube comment section and on google; Mohit also published two half-hour videos on this question you can watch it, or we are telling in short.

He said Travel Vlogging is one of the most expensive vlogging globally, so most of the money he makes on youtube fuel his trips. For some other minor purchases, he said he hardly save anything in a savings account; he said he invested 30 Lakhs in to build his channel, and until it didn’t get recovered, he is running in loss and will not make any profit.

And as far the Networth is concerned, so the estimated net worth of traveling desi is around 50 Lakh Rupees.

Travelling Desi Explaing How Much He Earn

Most Searched Queries About Travelling Desi

Q. What is the Real Name of Traveling Desi?

Q. When Did Mohit Manocha start his channel Travelling desi?

Ans. He started his channel in January 2018.

Q. Where is the Networth of Traveling Desi?

Ans. Traveling desi been through very hard times, where sometimes hi survive only at 2$ a day, but now his net worth is around 50 Lakh Rupees.

Q. What is the age of Travelling Desi?

This is the latest information about Traveling Desi Aka Mohit Manocha. We hope you like this information; if you do, please tell us in the comments and share this post with your knowns, and if we found any update about him, we post it here, so make sure you bookmark us, and if you want to contact us visit this page.