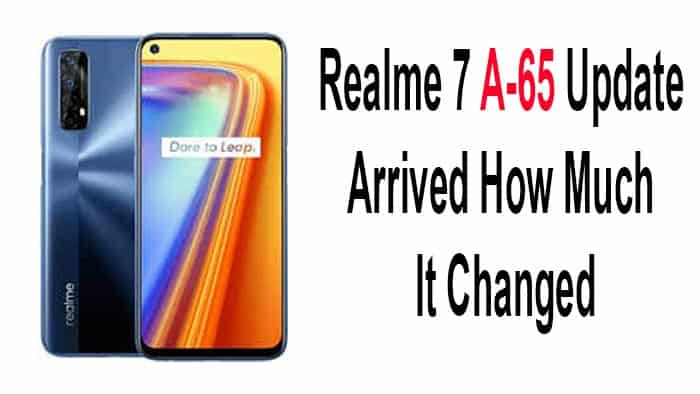 Hello guys, How are you today? So today, Realme 7 has launched the A-65 update. Some days before, Realme also has launched their a63 update of Realme 7, but that update didn’t do anything well, but this update is coming out much better than that. Many of you may not have received this update on your device yet, as this update is currently only available on the Realme Official Site. If you want this update, you can also update by downloading the firmware from the website or after a short time. You will get to see this update on the device as well, so now I will tell you about what improvements you will see in this update,

The optimized image quality of the primary lens

The first thing is that The image quality has been optimized, but it will be known only after the test. I will confirm it not only on my own, but you can also send me your before and after this update.

The second is Optimized the touch control algorithm, and improved touch control experience has also been improved. After the last update, the screen started lagging and freezing, but this update might resolve this issue, but it will be known only after all users receive updates because, in every update, Realme says that we have improved all the existing problems of the display, but after the update, nothing change well.

Fourth is Fixed the probabilistic screen flicker and optimized the display quality at low brightness conditions. These problems came with the box and didn’t solve till now. Screen flickering in low brightness. It has been resolved Realme claims in every update. Now let’s see did Relame solved it in this update, or it will last longer. This is a software problem; currently, this update has reached few users; within some days, all Realme 7 users can update their devices.

Your review on these points matters to other users and us, so how you feel after the Realme 7 A-65 Update tells us in the comments.