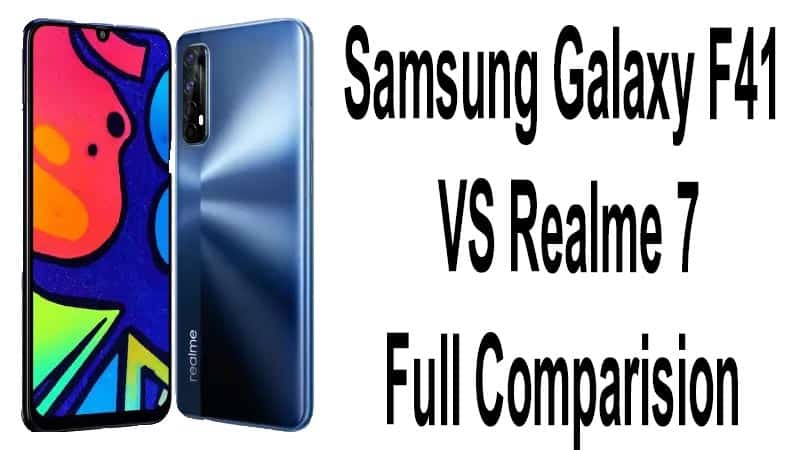 So how are you guys, today we will talk about Samsung’s recently launched smartphone, Samsung Galaxy F41, and Realme’s recently launched smartphone Realme 7, both of them are king within their category so if you have 15000 rupees budget, and you are looking for a smartphone under 15000 budget then this blog post is for you, in this post today will clear all your confusion about which of these two phones you would like to go with, so today we are doing a Full Comparision of Samsung Galaxy F41, and Realme 7 so let’s get started

But comes with Mat finish, in which you will not see scratches or smudges that easily and if you use the case in both phones. You do not have to worry about anything, and speaking of the side of these two smartphones, the power button on the side of Realme 7 has a high-speed fingerprint sensor, and a volume rocker button, now if we talk about the Samsung Galaxy F41 side. it has a power button and volume rocker button located in the side, and the fingerprint you will be able to see on its backside and if we talk about the bottom of both devices, then in Realme 7 you get a Speaker Grill, Charging Port, and Headphone Jack, while at the bottom of Samsung Galaxy F41you get a Charging Port, Speaker Grill, and Headphone Jack if I have to select both of them here based on Design and Build Quality, I would love to go with Realme 7 because of its design.

Read More: All You Need to know about what is Flipkart Mobile Exchange Offers Work?

Amoled display is considered the best display right now, so if you want a smartphone with a good display, then Samsung Galaxy F41 will be better for you.

But in Realme, you get to see a 90 Hz Refresh Rate display in Realme 7, which will not disappoint you at all, and if we talk about the Daylight Performance of both smartphones, you get to see equal brightness in both. But you will get to see a little more brightness in Relame 7, I am speaking to you with Personal Experience, so if I have to select here on the base of the display smartphone, I will choose Samsung Galaxy F41 on my personal choice. Because I like the Amoled display, but if you use Realme 7 too, then you will not be disappointed because it has a display with a 90 Hz refresh rate, which will give you a different experience.

Let’s talk about the processor and performance of the Samsung Galaxy F41. You will get to see the Samsung built Exynos Octa-Core Processor, you can enjoy the multimedia on this phone, but if you do pay Heavy Game like Pubg or do heavy editing, this phone will not be able to give you that good performance.

But if you take Realme 7, it has Mediatek’s latest Processor MediaTek G95 which is made to perform the heavy task in Realme 7. If you play massive games like Pubg, Call of Duty on this processor, you will get Constant good FPS in it and want a smartphone for normal. In day to day usage, you will not have any problem with Realme 7.

An advantage of Realme 7 is that it has a 90 Hz display, which will give you a smooth scroll that you can feel while using it in Realme Ui or apps like Facebook and Instagram, so if I have to select the phone on the bases of performance, then I would like to go with Realme 7 and if you do heavy tasks on the smartphone like playing games like Pubg, Call of Duty, video editing. I will recommend you to buy Realme 7 but if you don’t mind performance and enjoy multimedia more. Let’s watch videos more; you can go with Samsung Galaxy F41it has a great display to watch videos.

Now, let’s talk about these two devices’ rear cameras. Firstly, Samsung Galaxy F41 has 3 Camera Modules, which has a primary camera of 64 megapixels second is 8 MP ultra-wide and the third camera is 5-megapixel depth. The Macro camera is missing here, but most people do not use a Macro camera, then it is not such a significant disadvantage to turn off, and If we talk about Realme 7, then it has four camera modules in it. The primary camera is 64 megapixels, the second camera is 8 MP ultra-wide, and the third camera is 2 MP Macro, and the fourth is 2 MP Depth.

Read More: All you need to know about How Flipkart Smart Upgrade Work

So, friends, this is the full comparison of Samsung Galaxy F41 and Realme 7 Display, Camera, Design, and performance. We hope you our work if you do then please share this article with your other friends